At a special meeting of members on November 23, 2021, Spruce Credit Union members voted 99% in favour of merging with Interior Savings Credit Union.

The merger, which will come into effect on January 1, 2022, will combine 150 years of experience to create a stronger credit union with the resources and scale needed to better serve members within an increasingly competitive landscape.

“By bringing our two well-established and values-based credit unions together, we can provide better products, services and rates to members, greater opportunity for employees, and increased investment our community,” said Ken Dickson, CEO of Spruce Credit Union. “I’m particularly excited about the new Legacy Community Fund which will see $750,000 invested in Prince George community initiatives within the next two to three years.”

The combined credit union will operate as Interior Savings Credit Union and will provide a network of 23 branches and 16 insurance locations to 77,000 members from Prince George to communities across the Thompson Okanagan. Combined total assets under administration will be approximately $3.75 billion.

Noting our common values and shared commitment to preserving the human connection in banking, merger talks between our two credit unions began in 2019. With approval from both boards of directors, a business case was filed earlier this year with BC’s Financial Services Authority (BCFSA). In September, BCFSA gave consent to take the proposal to a member vote.

According to Kathy Conway, CEO of Interior Savings, “We are thrilled that Spruce members have voted in favour of this merger. We look forward to becoming a part of the beautiful and vibrant community of Prince George and to welcoming Spruce employees to our team as we work together to take all that is great about our credit unions and make it even better.”

While integration planning is underway, members will notice very few immediate changes to their banking. Spruce members can continue to bank as they normally would. As our credit unions work to integrate operations, we will keep members informed and work to minimize disruption as much as possible.

BENEFITS OF THE MERGER

Financially stronger, we will have more resources to invest in our future

Ability for greater investment in areas such as digital and community

More career opportunities for employees within a larger organization 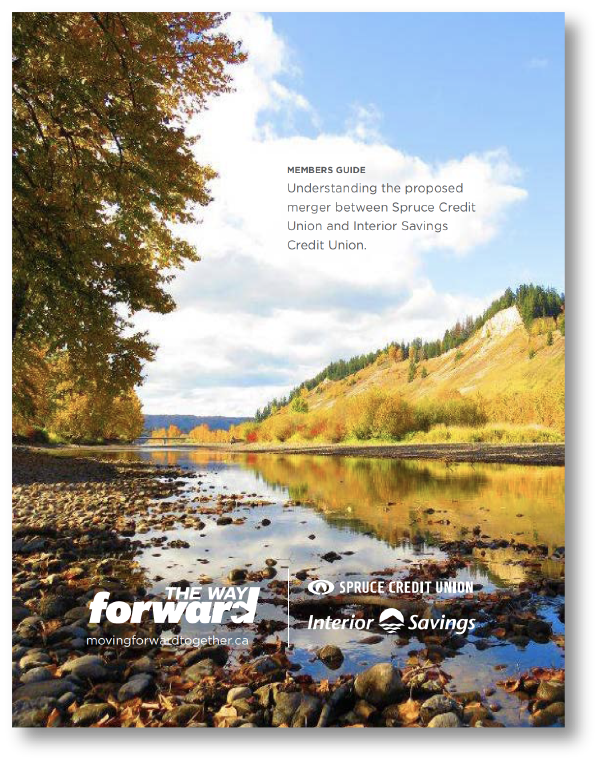 Read the Members Guide to Understanding the Proposed Merger

Learn More About the Merger Transaction

In addition to the Members Guide to the Proposed Merger, we encourage you to review our Supplemental Information Package. Download it here or pick up a copy at your local Spruce Credit Union Branch. It includes a copy of the full Asset Transfer Agreement, the BCFSA letter of consent, alternatives considered, Interior Savings’ rules and profiles of the directors and executive management of the proposed combined credit union.

We welcome and encourage you to attend one of our upcoming member information sessions where you’ll have the opportunity to learn more about the proposed merger and to ask questions. These sessions will be held virtually and hosted by Spruce Credit Union’s Board Chair, Reg Foot, and our CEO, Ken Dickson.

Thank you for being a part of our credit union and for lending your voice to help guide our future direction. If you have any questions or feedback on the proposed merger, please contact us at wayforward@sprucecu.bc.ca.

The proposed merger is about taking all that is great about our credit unions and making it even better. By combining our teams, our expertise and our assets, we’ll be stronger, better able to respond to increasing member needs, regulatory requirements and heightened competition.

Together we can provide members with a better service experience and more options, including more products, services, and technology solutions. In addition, by pooling our knowledge, resources and connections, we will be able to have a greater impact in the communities we serve, carrying on our founding members’ legacy for generations to come.

Should the Spruce Credit Union membership vote in favour of the merger, the two credit unions would officially merge on January 1, 2022 (or another date as may be specified by our regulator, the BC Financial Services Authority).

Our credit unions are committed to providing you with same high-quality, personal service that exists today.  At the time of the initial merger, you will notice little change to your banking and you can continue to bank as you normally would.

Over time, we will integrate our systems and operations so that you will have more products and services available to you, as well as more ways and more places within BC’s Interior to connect with us, including an expanded network of 23 branches.  Our goal is to minimize disruption as much as possible throughout this transition.

ABOUT THE CREDIT UNIONS

With a dedication to personalized service and a commitment to preserving the human connection in banking, Spruce Credit Union has been serving the Prince George community for over 70 years. As a full-service, member-owned financial institution, Spruce Credit Union provides lending, investment and day-to-day banking solutions to approximately 7,000 members through its two branches.

Interior Savings is dedicated to keeping local money working for local good. Through its 21 branches, 16 insurance offices, Member Service Centre, and two Commercial Service Centres, the Credit Union offers personal and commercial banking and a full range of insurance and wealth management services to more than 70,000 members across 14 communities. In the last 10 years, Interior Savings has returned $29 million to members through its Member Rewards and Million Dollar Bursary Programs and invested over $5 million in support of community programs.